Graphic templates as your co-facilitator

Graphic templates as your co-facilitator ..
When ‘work in smaller groups’ just doesn’t work…..

We are participating in a workshop, the facilitator has been doing good during the plenary sessions, we have been discussing the right things, important issues have been brought up, significant thoughts and ideas have been discussed, and its now time for ‘work in smaller groups.’ We spilt up in groups. Each group with a set of questions or topics to discuss. And from there the discussion runs of track…

The social mechanisms in a group will make it hard to keep the discussion on the right track. We tend to recognize and sweettalk each other, or jump into old, ritualized discussions.

If the group consists of people, who does not know each other very well, they will find it hard to interrupt and correct each other, since they will be eager to act polite and kind.

If the participants know each other well, they will most likely already have established their positions, likes and dislikes towards the subject. They will tend to repeat arguments that they have stated earlier, and to keep being loyal and on the same page with the colleagues they normally sympathize with. The discussion will easily become ritualized and conservative.

There is a strong need for a facilitator in these groups – but none of the participants have the authority to play that role; the groups may be located in different rooms, and you either run from one room to another or decide to stay with one group and risk loosing the rest . Or you just give up facilitating, cross your fingers and hope the best.

The authority of the paper.

To solve that problem I use graphic templates. They work as a kind of co-facilitator and help me lead and give direction to the work in smaller groups.

In some odd way the paper, – the template, – has a kind of authority, which makes it easier for the group members to facilitate and discipline each other.

It is a very low-tech method – but it works.

When I as the facilitator for example ask the participants to identify the five major challenges in the coming organizational change – and they split up into smaller groups to work with that question – they rarely come back with five. They get caught in a discussion, that they cant find a way to leave: Some of the group member are very engaged in some related issues (but not in discussing the five major challenges), others find that it is not the right question to discuss, others think that the whole idea of this organizational change is wrong, others grab the chance to discuss an old and well-known contradiction between some of the stakeholders and others just want to get the job done and identify the five biggest challenges.. But they don’t have a chance.

Unless we supply them with a template – a large paper – that indirectly instructs the work.

If we for an example give the group a template, saying ‘The five biggest challenges’ with the numbers from one to five, they are more likely to fill them all. 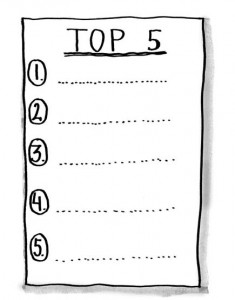 A template makes it easier for the group members to point at the template – at the common task – and drag the discussion back to the main track. If we present three concepts to a group, and ask them to discuss Pros and Cons to the concepts, it will be very difficult for them to keep that focus. If instead we give them a template for each concept with numbered, empty space and ask them to write the central Pros and Cons, it will be much easier for them to keep focused. It becomes easier to use their knowledge and experiences in a constructive way, which supports the purpose of the workshop. 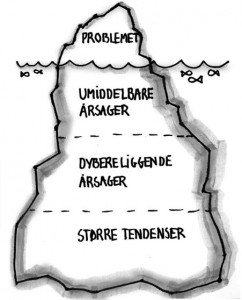 So instead of giving the groups questions and topics to discus, give them task and templates to fill out.